No penalties for incorrect IR35 determinations

The UK Government has announced that will waive penalties relating to incorrect IR35 determinations for 12 months from April 6th 2021. The move comes amid widespread confusion relating to the legislation from both fee-payers and affected contractors.

The immediate prose of IR35 reform remains true; as of April 6th the government is mandating that it is the responsibility of all medium and large-sized private and voluntary sector organisations, and all public sector organisations to assess the employment status and tax position of all contractors that they engage – failure to do so will result in a fine. However, the recent announcement of the removal of fines for “inaccuracies” in the first 12 months allows a degree of leniency when it comes to unintentional errors (though evidence of actions to correct these errors may be requested).

Of course, this offer of generosity came with a disclaimer that any evidence of “deliberate non-compliance” would render it void – in this case, fines/penalties would be back on the table. They state very clearly “we’ll always follow up on non-compliance if there’s a sign of deliberate behaviour”.

In a noble decree, the government has stated that its goal is to support those businesses that can evidence they are attempting to comply with the new law. This provision will be welcomed by many; it offers an opportunity for gradual alignment with the legislation and some scope for trial and error when making determinations in year one.

But, it also raises questions. If the government had full confidence in the way it had prepared businesses for IR35, then there would be no need for this measure. The same can be uttered for the reliability of their CEST tool – if they deemed their own IR35 determination tool to be 100% accurate and reliable, then errors would not be something to contend with.

The government is well aware that the CEST tool is inadequate, and has freely commented that they would not make specific employment status determinations themselves but would rather “provide support based on our view of the employment status indicators and give advice on best practice to help you [the fee-payer] fulfil your obligations”. This leaves the onus on the fee-payer to get the determination correct. A determination that needs to be made in direct correlation with government legislation, for which they cannot accurately produce determinations themselves.

It’s also important to note that although corrected errors may be tolerated for a short period, someone is undoubtedly losing out from a tax perspective. For example, an incorrect determination may impact the ability for a contractor to operate as a PSC, resulting in reduced ability to claim expenses and benefit from other tax reliefs associated.

When all of this is considered, it’s no wonder they’re allowing for some leniency. Is the government buying more time for themselves to truly understand the scope and impact of the legislation?

Regardless, employers are being asked to report any mistakes as early as possible in order to expedite correction through the relevant government parties. Treat it as an opportunity to iron out the kinks in preparation for April 2022.

Our advice would be that, even with the new “grace-period”, this does not mean that it can be forgotten nor ignored for another year. You should approach with caution, diligence and recorded, reasonable care. Engage an independent, insured determination platform who considers the entire supply chain and looks at key factors missed by the CEST tool.

If you have IR35 concerns, or are unsure of your responsibilities, contact us, we’re here to help. 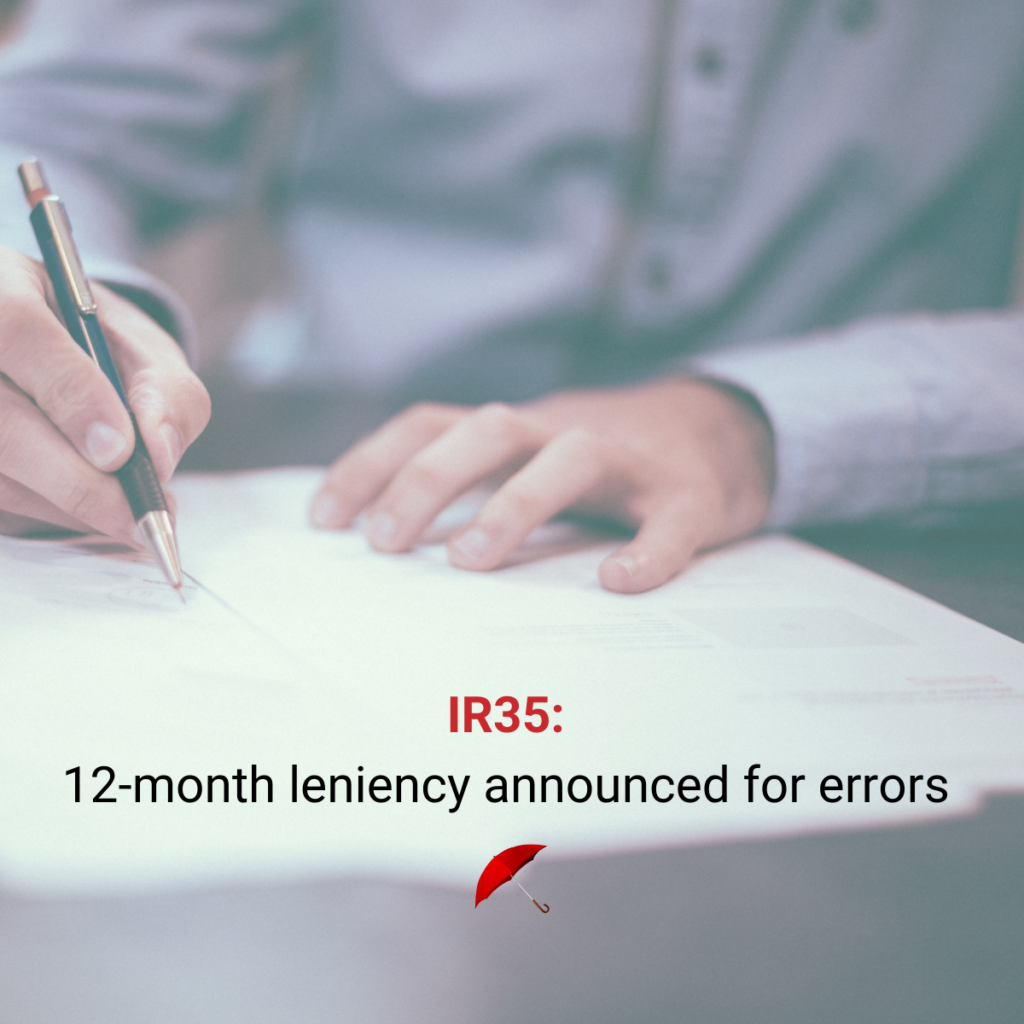 PrevPreviousIR35: 5% expense allowance being withdrawn from PSC contractors
NextCan my Agency Dictate what Umbrella I Use?Next

How do I claim holidays?

Umbrella 101 – What is an Umbrella Company?

*A £50 Amazon voucher is available to any contractor joining our PAYE Umbrella Payroll services 20/11/2020 – 30/4/2021. Your voucher will be released to the email address we have on file following one month (or 4 weeks for weekly processors) of successfully processed timesheets. For additional details or to enquire further please contact contractorcare@theoffice-online.com

This website uses cookies to improve your experience while you navigate through the website. Out of these, the cookies that are categorized as necessary are stored on your browser as they are essential for the working of basic functionalities of the website. We also use third-party cookies that help us analyze and understand how you use this website. These cookies will be stored in your browser only with your consent. You also have the option to opt-out of these cookies. But opting out of some of these cookies may affect your browsing experience.
Necessary Always Enabled

Any cookies that may not be particularly necessary for the website to function and is used specifically to collect user personal data via analytics, ads, other embedded contents are termed as non-necessary cookies. It is mandatory to procure user consent prior to running these cookies on your website.